Barcelona. The World Mime Organisation (WMO), headquartered in Belgrade, has presented its Special WMO Award to the actor Carlos Martínez for his significant contribution to the art of mime. Carlos Martínez received the recognition at the hands of Marko Stojanović, President of WMO, and Ofer Blum, Vice President, on the occasion of the First World Mime Conference.

WMO was founded in 2004 by the two disciples of the French actor and mime Marcel Marceau. The organisation has now become a global network for artists, teachers and professionals of the art of mime. WMO is a partner organization of the International Theatre Institute (ITI) for the performing arts, which operates under the umbrella of UNESCO.

This WMO award represents the acknowledgement of the stage work carried out by Carlos Martínez over 36 years. WMO underlines his faithful dedication to the essence of mime while creating his own independent style and the actor’s commitment to the profession in the area of content and precision. 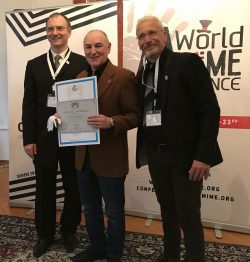